I just would like to say a huge thank you to everyone who has made my last couple of weeks in the UK and in Germany so special. I have been to Plymouth, London, Bangor, Oban and to home in only 6 weeks (two of which I spend in Germany). If I wasn’t so sure that you guys just wanted to make sure that I would really bugger off, I would have thought you actually like me ;)


So what happened before I left? Our winter here in Antarctica has just about started and I am struggling to remember all the amazing things I did. Kathy and I went to London together and also went to see the Harry Potter Studios which was absolutely amazing. I went to Bangor straight after the
Powerboating Course from where 4 of us went to Oban and had 3 days of sunshine (yes, sunshine in Scotland) and diving. I went to Plymouth for a weekend to start saying goodbye and it was really nice to see people before I leave. Bangor again after that weekend for party, the cinema,


some beautiful countryside and unfortunately “The Thing”
(I am sure that will go down well during night shifts). Plymouth again after that where we had a classic night out with penguin cake (thank you Claire) and a slight hangover. In between weekends and work I spend my evenings trying Octopush, joined the Cambridge BSAC and tested some local pubs (thanks everyone in Cambridge for taking me in during the short time!). After that it
was time to go home for two weeks. I had everything I wanted: my family, Christmas market, one last diving adventure (only needs a pool, the right kind of people, toys, dive kit, Fleischwurst and some booze). The semi-surprise party organised by my amazing mummy rounded the time home off nicely. Excitement was now at a high (although I was still waiting for BAS to turn around and tell me it was all just a joke). On Monday (10/12/2012) I was back in Cambridge. Monday evening (I thought I got finally rid of them), the Bangor crowd showed up again (I knew now not to forget my rescue pig in case the ship would sink ...) as they picked up


my lovely little car. My hangover on Tuesday was cured with the Christmas meal at BAS which included free
whine. Tuesday night I lodged at Emily’s (thanks again so much!!!) which included a lovely meal with friends from diving and enough Cider that I was actually able to go to sleep before the big day. Wednesday!!!
12/12/12 ... I had to wait until 4pm for the taxi to pick us up! Finally in
there, I could not believe that we were actually on the way to Brize Norton. The only thing in the way now was the chance for icy fog!


I know I have said this before, but I just wanted to thank everyone again who has been part of my journey so far. Without every single one of you I would not be where I am today! Thanks to my amazing family, friends, lectures, mentors and everyone else who does not fit into one of these categories!
Posted by Unknown at 06:52 No comments: 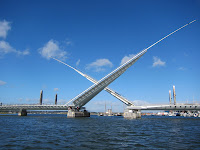 And now it’s finally time for the last course: boating in Poole. We were put through the Powerboat Level 2 and the Advanced Powerboating Course. A bit of theory and lots of practice as it were only 2 of us with the instructor. The hotel room I stayed in was absolutely massive (I have never lived in such a big room before). The best day was the second last day when we took the bigger RIB out and were planning on driving a route which we had planned the day before. After heading out for about 20 minutes, I was quite glad when the instructor finally called it off due to the swell (my legs were shaking and we were completely soaked through). Nevertheless, it was good fun and perfect practice (easy peasy driving a boat in calm conditions ...).
On the last day, we took the RIB out and afterwards I was allowed to demonstrate how the lifejacket work. That meant, being tied onto a rope, wearing my drysuit and a lifejacket and jumping off the boat. After the lifejacket inflated I turned myself onto my front. After a moment or so I realised that the lifejacket does NOT turn me back on my front as promised ... Lesson learned: drysuit with lifejacket together do not safe you from drowning!
Good couple of days and now ready to go off to Antarctica! Just about 4 weeks left in Cambridge, 2 weeks pre-embarkation leave and I will be on my way. Although, I am still convinced, that someone is going to turn around and let me know that it was all just some kind of joke! <(“)