The sun is back!

You might remember my post about the sun disappearing. I would like to mention that we did not actually have complete darkness despite the sun being gone. We had at least a couple of hours of dusk/dawn each day. At midwinter we celebrated the shortest day of the year. From then onwards, the days could only get longer. The flag was taken down by the oldest member on base. However, putting the new flag back up and welcoming the sun is the task of the youngest on base. And that is me!!! We waited for quite a while until we were able to see the sun as
it was cloudy and bad weather for days. But finally, it was there (and hell, seeing shadows again is quite cool). We spotted the sun on a Sunday and went for it. I read out “Always look on the bright side of life” which luckily everyone joined in during the chorus. With my lovely little sunhat (yes, I know how silly it looks), I raised the flag which will fly there until it is taken down again next winter by the oldest member of the wintering team 2014. 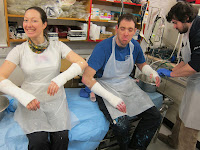 After learning how to take x-rays in the last session, we now learned how to put casts on for a broken bone! We practiced on arms and legs and everyone had a go. Quite a lot of whimpering was going on over broken bones but in the end, everyone walked out of the room being healthy

This is a blog entry I wrote for the Ocean Sampling Day (please see http://www.microb3.eu/osd for more information). We sample twice a year for the OSD and the filtered samples are frozen and send back for analysis.

Rothera is a British Antarctic Survey research station, located on Adelaide Island on the Antarctic Peninsula at 67° South (http://www.antarctica.ac.uk/living_and_working/research_stations/rothera). Like last year, we were planning to get out on the actual Ocean Sampling Day but where stopped by the weather and ice conditions. We had fast ice in Ryder Bay which prevented us from getting a boat in the water. However, as the ice was staying longer and longer, we were getting very excited about the possibility of doing a CTD and water sampling through the ice! When it was finally signed off, we were ready to go but the wind once more was in our way. Luckily, we were able to dive through the ice as it is closer to the shore and less dangerous. Then, we experienced why Antarctica is called the windiest continent on the planet. After a weekend of around 40-50 knots winds, half the sea ice in Ryder Bay had been blown out. Luckily, this meant we were able to get a boat into the water on the first calm day (just before the sea started freezing again).
We got out to Site 2 (67°34.850 S, 68°09.340 W) on the 22nd of July. Site 2 is one of three sites commonly used for the RaTS (Rothera Biological and Oceanographic Time Series) sampling (see Picture 3). We sampled just on the edge of the fast ice. The day started off very calm, but winds were picking up later on and finished just in time before we would have had to abort the sampling. The air temperature was only around -5°C. The water temperature was similar to last year -1.52°C. We deployed the CTD to 300m and winched it back up again by hand. Afterwards we collected water samples from 15m with our Niskin bottles.
Same as last year, we filtered 2l for each filter. However, on the ship last summer we finally got some Sterivex filters in which we used (4 replicates). They were frozen immediately with liquid nitrogen and are being stored in the -80°C freezer until the ship next March picks them up together with the samples from our Ocean Sampling Day in the summer.
The RaTS program includes various aspects of sampling. With our CTD we measure depth, salinity, temperature, PAR and fluorescence and the water samples we take back are mostly bottled up for analysis back in the UK by a number of different institutes. We analyse chlorophyll and ammonia in our lab here at Rothera. Whereas analysis for HPLC, nutrients, CO2, salts, isotopes, DOC, viruses, Barium and metagenomics is conducted elsewhere.
Sabrina Heiser, Rothera Marine Assistant

(http://oceansamplingday.blogspot.co.uk/)
Posted by Unknown at 17:57 No comments: 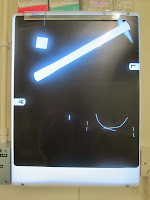 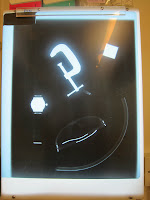 It is always useful for the doctor if we are able to take and develop X-rays. It means that she can stay with the patient. The process in the dark room is quite similar to developing pictures from an analogue camera and takes about 20-30 minutes. We had several objects we were allowed to take x-rays of and developed those afterwards. Good fun and easy to do!