And today’s lesson is suturing! We have to be able to stitch someone back together either in the field or possibly on base during a major incident (but I guess/hope this is less likely). It is not quite like poking people with needles so we did not get to practice on each other but on lovely little duck breasts. The suturing itself was not as difficult as I expected it to be (once I got the hang of it). We tried our best, but I doubt any of them duck breasts made it... 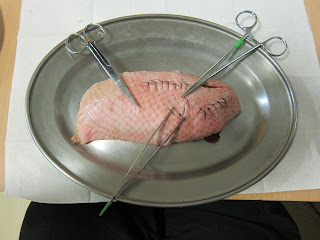 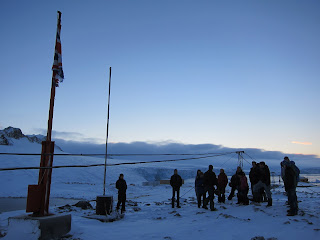 Who would have thought how quickly time runs by. It seems like yesterday that the ship left. However, the first round of winter trips is already over and we are heading strongly towards midwinter. It is a tradition to lower the flag every year when the sun is gone. Luckily we are not too far south, so even when the sun is gone, we will still have civil twilight for a couple of hours and it will only be for a couple of weeks. Officially, the sun is still rising above the horizon for another week or so, but the mountains prevent it from being seen by us. So we decided to take the flag down today. Traditionally, the most experienced member (ie the oldest) takes down the flag whilst the youngest puts the flag back up. Tonight a name will be drawn out of the hat to decide who is going to keep the old flag (fingers crossed!). 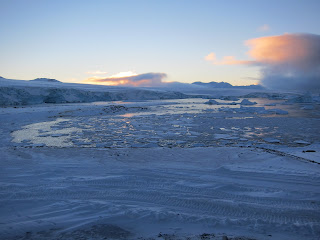 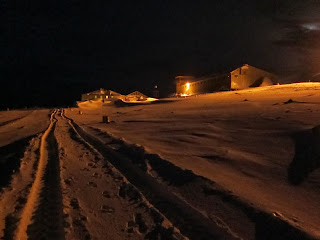 During winter, we have to take it in turns to stay up during the night. It is important that there is someone up at any point in time to respond to alarms and/or check that everything is working alright. Nightshift starts around 11pm and ends in the morning as soon as someone is up which is usually around 8am. Every night, I had to go on rounds at 12am, 3am and 6am. The 12am round was much longer as also the southern part of the station had to be checked. I generally had to check that the generators were running, that all lights were turned off, fire doors and doors to the outside were closed, that there were no leaks and that nothing was burning/smouldering, that relevant equipment was still running (ie freezers, aquarium, heaters) and so on... On the full hour I had to be in the tower and listen to the radio for 5 minutes in case the winter trippers had any problems and tried to get into contact with us (in a real emergency they would be able to use the Sat-phone to get into contact as well). It stayed all quiet except for the white noise and voices which is quite creepy when everything is dark outside. The best nights were those when people stayed up longer in the bar which made nightshifts less lonely. On top of rounds there were cleaning jobs to do which varied every night – the place does not stay tidy and clean by itself... Another important task for nightshift is to put some banter on everyone’s whiteboards. I was playing hangman with everyone which was good fun and kept my mind busy whilst walking through darkish places. Twice during my week on nights I had to wake up people. The Met-guys have a screen which goes red when the equipment is not working properly (and it was in the beginning of week). At the end of the week, I had to wake up our electrician as the Sewage Treatment Plant kept tripping out even after putting the fuse back in. I did wonder what the protocol was for waking people up... Other than that I planned on being super productive, like updating my blog, sorting through pictures, starting my midwinter present. But no. Instead, I just about managed to do some baking and lots of jigsawing. A good thing about nights was that the internet was much better than usually which meant that I was able to speak with my family on skype J However, I was definitely glad when the week was over and I was able to see some daylight again! Took a couple of days, but I eventually got back into day rhythm.
Posted by Unknown at 12:26 No comments: